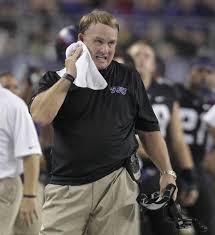 A response to a rant posted on Frogsowar.com

Since Thanksgiving includes meaningless waste of time with games, TV, and sports, I think it’s fitting to respond point by point to ‘Bayou Frog Fan’ and his printed tantrum:

This in a piece which starts with a large photo of an injured Baylor player, with no evidence of sympathy or compassion.  Let’s not forget that just last week a TCU player again was guilty of deliberately injuring an opponent, as Ty Summers was ejected for a dirty hit on OU’s Baker Mayfield.

“Baylor disgusts me. I look at Baylor like a backed-up toilet… in . To me, Baylor people don’t wash their hands after using the restroom. Baylor people use the word "irregardless". Baylor people kill endangered animals on captive trophy hunts. Baylor people eagerly await the next Kevin James film. (Expletive which means "to fornicate") Baylor.”

We shouldn’t be surprised.  After all, just a couple seasons ago Coach Patterson publicly admitted he wanted nothing to do with class.  This proves he was serious.

“Reason #1:  – I’ve been to some of the more hopeless, desolate spots on the planet where shrapnel and overpressure are daily concerns.”

Sure you have.  There’s a reason there are no major pro sports franchises in , no prominent doctors, authors, or scientists from Forth Worth, and absolutely no one ever goes to for a vacation or to experience nirvana on earth.

is located in a convenient location for travel to , , or . has several celebrities of note, and Baylor annually produces state and national leaders in many fields.    has a low cost of living , relatively low crime compared to places like , and is downright beautiful at least half the year.   has cattle tramp through it every so often … which is the high point of their year.

“Reason #2: Terminated for incompetence … This is how I felt when interacting with my former Baylor-alum-coworker on daily basis. Every morning, I sat in silent, soul-cleaving agony ignoring his droll platitudes, waiting for the moments where he mercifully stopped complaining about his aptitude-deficient offspring or his clueless wife.”

See #1 about alumni again.  Baylor produces prominent leaders in all fields, so his anecdote falls flat.  Not to disparage TCU too much, however.  Sewer cleaners have to come from someplace, and who better than a school whose mascot lives in muck and excretes all manner of fluids, to produce those workers?

“Reason #3: Jeff Dunham – All comedy is born of tragedy”

Only someone completely lacking a sense of humor could believe that.   To be fair, TCU is a place with a great deal of tragedy, so I can’t blame them for desperately seeking meaning for all their suffering.

“Dunham is just a glorified sword-swallower cashing in on the intellectual decline of .”

When someone resents personal accomplishment by someone who brings joy and laughter to many people, that person proves themselves small, mean … and in this case a TCU student or alumnus.

So I really need to point out the hypocrisy of pretending has worse gang violence than , or crime in general?  And who seriously thinks this tragic incident has anything to do with ?

“Reason #5: …the (verb which means "to fornicate" in present participle form) cult –Ask anyone who is aware of cults about the aforementioned topic, and you’re bound to get a thread in your response.”

See response to #4 about complete lack of connections to .  It occurs to me, however, that anyone using a psychotic cult reference from decades ago in a sports conversation may be a bit indicative of personal psychiatric deficiencies in the person making the reference.

See responses to #4 and #5.  Persistent obsession with death and tragedy in the context of a sports discussion is prima facie evidence of a serious mental disorder.  I’d suggest that is not the best environment for someone to represent a major university, nor even TCU.

How very odd.  After using the word amateur, the writer cites numerous (but not all) examples of Baylor athletes who became professionals, while mentioning no TCU alumni in the pro ranks at all.   The dishonesty in ignoring the success of Baylor athletes besides the ones he mocks only further proves the opposite of his claim.  For the record, there are ten Baylor alumni currently active in the NFL.

“Reason #8: A blueprint for coach behavior”

Art Briles has won the last two Big XII titles in football, two of his assistants are now FBS coaches in their own right, he has coached players every year to levels of success well beyond their initial evaluated talent, and media regularly comments about the courteous and team-focused character of both his players and his staff.   TCU?  Well, at least Patterson has that Rose Bowl ring he likes to show off so much … along with paranoid statements about imaginary events.

Apparently it runs deep in .  Briles beat TCU three of the last four years, including last year, which may have been TCU’s best team in the last half century. The writer admits Briles has “built a national contender with his high powered offense”, even while he throws lies and innuendo in an obvious display of his own paranoia and delusion.

Like so many of his other claims, this one tells us much more about TCU than the writer realizes, and demonstrates a sad lack of maturity in Dallas’ unsuccessful sister city.

“There’s a ball game on Friday.”

Right.  And it scares the hell out of TCU.