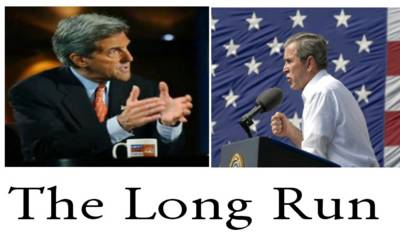 Well, reading through every column and article on the election I can find, has its downside. Right about now, there seems to be a surfeit of people claiming one of two extremes. Some, whom I will not honor by naming here, have claimed that John Kerry has locked away the election unless George W. Bush gets a miracle. How a no-bounce, 3-point average lead (remember, the MoE is anywhere between 3.0 and 4.5 points in most polls) becomes a lock, they don’t say, but there are a lot of ‘em saying it. Others insist that because the race is so close now, that there is no possibility it will be anything but a close race all the way. That is a bit more reasonable, but all in all, there' s no reason to believe that's locked in, either.

Since Gallup began polling as we know it (with weighting for demographics and regional sampling, etc.) in 1936, there have been 17 Presidential contests available for comparison in poll results. For this article, I decided to see where each was in mid-August of the election year, as well as the final poll before the election, the actual election results, and any unusual movement. I will also use information from this article for another one following it, where I examine the difference between a race between two equal candidates, between a President running for his first election against a challenger, and between a President running for re-election against a challenger. For this article, all poll data is from the Gallup polls at the time, Gallup being the only poll group which has run consistent polls through all of these elections.

In 1952, Dwight Eisenhower ran against Adlai Stevenson, and in mid-August Eisenhower led, 55-41. Stevenson closed to within 14 points by Labor Day, and to within 9 by mid-October, but the last poll had Eisenhowere ahead 51-49, projecting a close finish. Eisenhower won the election with 55.1% (to 44.4%) of the PV. Gallup was off by an aggregate 8.7 points.

In 1960, John Kenendy ran against Richard Nixon, and in mid-August JFK led 48-47, in a race which was tight through Labor Day, when Kennedy pulled a little ahead to a 3-point margin. At the end of October, though, the last poll was very tight again, Kennedy ahead 51-49. Kennedy won with 49.9% (to 49.8%) of the PV. Gallup was off by an aggregate of 1.9 points, an especially good showing in an especially close race.

In 1980, Carter ran for re-election against Ronald Reagan. In mid-August, Reagan led 39-38, a very close race (bet you didn't remember it was still close in August). After the debates, reagan opened a 47-39 lead, but Carter closed fast and in the last Gallup poll, Carter led Reagan 47-44. Reagan won with 50.8% (to 44.0%) of the PV, and Gallup was embarassed for the wrong pick. Gallup also, was off by an aggregate 9.8 points, their worst call since 1936.

In 1992, President GHW Bush ran for re-election against Governor Bill Clinton (H Ross Perot was also in the race, and actually led in the late spring, but he pulled out of the race in late June, and although he returned in the fall, it was too late to rebuild his campaign). In mid-August, Clinton led 54-39, and appeared to be in control. But Bush closed steadily on Clinton, and by the last week of October, the race was 41-40. But Clinton pulled a bit ahead again, and the end of October was 43-37. Clinton won with 43.0% (to 37.5%) of the PV. Gallup was off by an aggregate 0.5 point, absolutely amazing in its accuracy.

In 1996, Clinton ran for re-election against Bob Dole. In mid-August, Clinton led 53-36. In early September, Dole started to close, but the debates were good for Clinton, and although Dole closed again in late September, Clinton rebounded, and the end of October saw the poll at 52-41. Clinton won with 49.2% (to 40.9%) of the PV. Gallup was off by an aggregate 2.9 points.

In 2000, Vice President Al Gore took on Governor George W. Bush. In mid-August, Gore was ahead 47-46, a tight race again. Bush retook the lead in late August, only to see Gore take it again in mid-September. The debates worked for Bush and gave him a small lead, which he built into a 52-39 lead by mid-October. But Gore closed fast in late October, and the end October poll was only 48-46 for Bush. Gore took the PV, 48.4% to 47.9%, but Bush took the Electoral Vote and the White House. Gallup was off by an aggregate 2.5 points.

For these seventeen elections, Gallup called the Popular Vote Winner correctly 15 times, and the election winner correctly 16 times. They were off by as little as 0.5 points for the two major parties, or as much as 12.0 points, and an average aggregate variance of 4.5 points. Four of the elections were close in mid-August, and two of those finished close, with another three races closing at the end to finish tight.